Neither scholars of advertising nor historians of the American Jewish experience have paid much attention to tracing the role of Jews in the advertising profession nor how American advertisers employed images of Jews to market products. These two lacunae stand in stark contrast to the extensive scholarship in American Jewish history, a field that, since the 1890s, has seen vast inquiries into the political, economic, social, and cultural life of the America’s Jews. Likewise, studies examining the evolution of advertising in America, charting its powerful role in shaping consumption patterns and culture, have left Jews as invisible players.

A robust literature does exist on the history of Jews in business in the United States, which certainly provides one context for considering Jews advertising. How and when did Jews enter advertising as owners and employees? Did agencies, from the 1890s to the 1960s exclude Jews, as happened prominently in many professional and business fields, and did Jews, as they did in law and medicine, form their own institutions? Did Jewish-owned advertising agencies handle the accounts of Jewish-owned businesses?

American advertising, emerging in the late nineteenth and early twentieth century, in the main, emanated from New York, home to the largest concentration of America’s Jews. In those same years an increasing number of American Jewish men, particularly the sons of central and east European immigrants, received thoroughly American educations and their ethnic community had long been engaged in business. These factors together should have seen a steady stream of Jewish men, and maybe some women, enter the advertising profession.

Questions about Jews as admen ought to be considered in conjunction with questions about depictions of Jews in American advertisements. An enormous literature exists charting American iterations of graphic and discursive Jewish stereotypes in the press, on stage and in film. Iconographic formulae, familiar from Europe, circulated widely in the American press and in political cartoons, depicting Jews as physically and facially distinctive. Yet no examples exist of American advertisers relying on these caricatures. Why not, and how, then, did advertisers denote Jewishness if not by stereotypical physical characteristics? How did they depict Jews as people in advertisements for products destined for Jewish consumers in particular?

Despite the lack of scholarship, a few necessarily preliminary observations can set the stage for thinking about Jews and the world of American advertising, offering the outlines for what could be a rich subject for historical inquiry.

JEWS IN THE ADVERTISING PROFESSION

While we do not know much about most of the Jews who opted for careers at ad agencies, the names of several figures loom large as founders of American advertising who helped shape the field.

While associated more with the history of public relations than advertising in the more narrow sense, Edward Bernays, the Vienna-born nephew of Sigmund Freud, made social scientific and psychological theories of crowd psychology central to selling goods to the public. He helped the American Tobacco Company when it wanted to transform public opinion to accept the idea of women smoking in public and from the 1910s-1960s, orchestrated advertising campaigns for Venida hairnets, Proctor& Gamble, Dixie Cups, and the Aluminum Company of America (ALCOA).

A generation older than Bernays, Albert Lasker, has been referred to as the “father of modern advertising.” He developed the principle that advertising copy should be short and effectively explain a product’s superiority. At the Lord and Thomas agency in Chicago, where he began working in the 1890s and owned by 1912, he established the world’s first copywriting department and over the years created campaigns for Kotex, Kleenex, and Lucky Strike.

Other notable Jewish men who made a mark in the earlier decades of advertising in America include Willam Bernbach, Norman B. Norman, Stanley Arnold, Frederic Papert, Julian Koenig, Maxwell Sackheim, David Altman, Ernest Dichter, Milton Biow and the three founders of the agency Grey Advertising, Lawrence Valenstein, Arthur Fatt and Herbert Strauss. Only two names stand out of Jewish women who helped shape the world of American advertising. Helen Woodward, who began as a clerical worker, eventually worked her way up the ladder at the Hampton Agency and the Presbrey Advertising Agency during the 1910s and 20s. Shirley Polykoff produced some of the most iconic campaigns of the 1950s, for Chock-Full o’ Nuts and Clairol at Frederick-Clinton and Foote, Cone & Belding.

IMAGES OF JEWS IN AMERICAN ADVERTISING

A survey of the images of Jews in American advertising would fall into two broad categories: advertisements that relied on depictions of American Jews targeting the general American public and those appealing to Jewish consumers. As to the first category, though in-depth research might yield different results, to date, little evidence exists that American advertisers deployed images of Jews. Neither the pious bearded Jew, the rapacious, thick lipped, hooked nose Jew, nor the overweight Jewish woman, dripping with jewelry showed up among the countless images produced by American advertisers.

Did they fear alienating Jews as potential consumers? The seeming absence of Jewish images, negative ones in particular, contrasts boldly with advertisers’ comfort in using African-American, Chinese, Native-American, Irish, and Italian caricatures. These dramatically larger populations also bought products of all kinds and yet their role as consumers did not deter advertisers and manufacturers from employing stereotypes. To what degree did the existence, since the middle of the nineteenth century, of Jewish defense organizations such as the Board of Delegates of American Hebrews (1859), the American Jewish Committee (1905), the Anti-Defamation League (1913) and the American Jewish Congress (1921) cause advertisers to eschew using defamatory images of Jews?

Manufacturers and advertisers did explicitly target Jewish consumers, testified to by the countless advertisements for major corporations in Yiddish and English-language Jewish publications, from the period of intense immigration from central and eastern Europe in the late nineteenth century and continuing into the middle of the twentieth. Jews, even during the immigration era, caught the attention of American manufacturers and the advertisers, and while we cannot know how much advertisers understood of Jewish migration and cultural patterns, the fact that women migrated in equal number to men, that Jews had no intention to return to the lands from which they came, that they settled in cities, and that they rapidly embraced American standards of consumption made them excellent targets for advertisers. By the 1910s Gold Medal Flour, Borden’s Milk, Uneeda Biscuits, Quaker Oats, H.J. Heinz, Coca-Cola among other companies routinely advertised in the Jewish press. At the same time, these companies rarely advertised in Italian language publications.

Many ads aimed at Jewish consumers came from the Lower East Side office of Joseph Jacobs, a figure who would have to feature prominently in any history of Jews in American advertising. Launching his company in 1919, which would eventually become Joseph Jacobs Advertising, he helped American advertisers translate their material into Yiddish and worked with companies to design advertisements aimed directly at Jewish audiences.

Advertisers in particular targeted Jewish women in as much as many of the advertisements concerned their conventional zone of activity, the home. Foodstuffs, cleaning agents, and household appliances constituted much of the advertising marketed to Jews. In some instances, ads in the Jewish press merely reproduced those from general American publications, translated into Yiddish where necessary. Other advertisements played on one of two key themes: the capacity for consumer goods to aid in Americanization or, conversely, their ability to preserve tradition.

Ads in the Yiddish press often assured readers that by using particular products or consuming particular foods, newcomers could be ushered into American culture. American products would enhance health, a common concern among these immigrants, foster greater cleanliness, and provide modern, scientific standards of nutrition for their children. Borden’s Eagle Brand Milk, for example, advertised in the 1913 Froyen Velt: The Jewish Ladies Home Journal with a picture of sickly Native American children on the Pine Ridge Reservation with the statement, “Every President of the United States Can Claim Immigrant Origins.” The message was clear: give your child Borden’s Eagle Brand Milk and this child of an immigrant may someday be president; withhold it and he will end up malnourished, weak, no better off than the Indian children languishing in poverty.

Other advertisements in the Jewish press employed the opposite strategy, emphasizing that American products could enhance the practice of Judaism. Companies placed advertisements proclaiming their products as perfect accompaniments to Jewish holidays, whose celebrations often revolve around cooking. Some ads employed biblical imagery or depictions of men and women performing rituals.

In 1932, in a famous promotional campaign, Maxwell House released what became a classic in American Jewish homes, a Passover haggadah, the book used at the seder table. In the 1920s Maxwell House had secured kosher certification and reassured consumers in advertisements that coffee could be consumed during Passover since coffee beans are berries and thus do not violate the holiday’s prohibition on consuming grains. The haggadah offered further proof to the wary that Jews could continue drinking coffee during the holiday, and that their coffee should be Maxwell House.

A final example, from America’s largest circulating Yiddish newspaper, Forverts (Jewish Daily Forward), reveals another strategy in marketing American products to Jews. An image of rugged Jewish farmers, harvesting their crop in Palestine appeared in a 1935 ad for Diamond Crystal Shaker Salt. “The land of Israel,” the advertisement announced, “is the only country in the world which balanced its budget.” At a time when American Jews became increasingly supportive of the Zionist enterprise in Palestine, Diamond Crystal Shaker Salt tapped into Jewish concerns, marketing a product that had no connection to Zionism or Palestine. In its smaller print, the advertisement noted that “Jewish housewives choose” this product because it offers them a way to “salt their meat as the law requires,” referring to the need to salt raw meat to render it kosher. 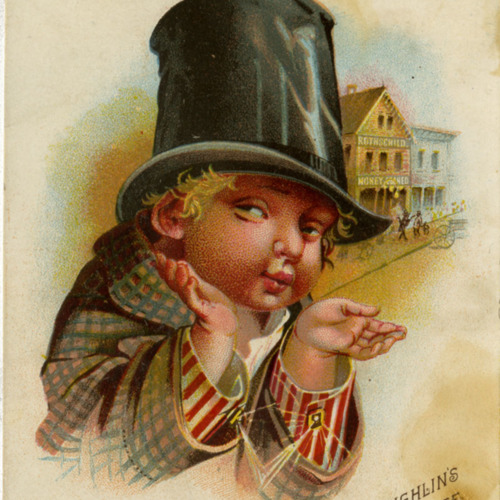 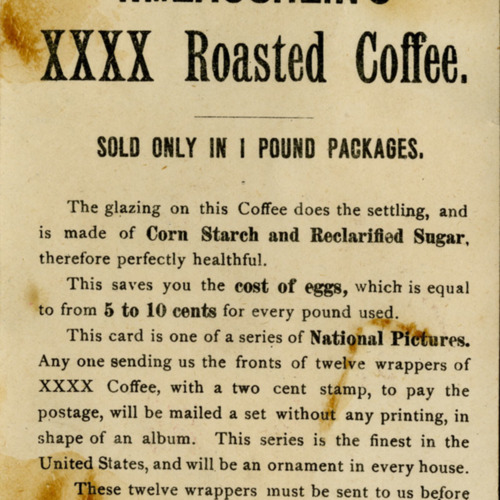 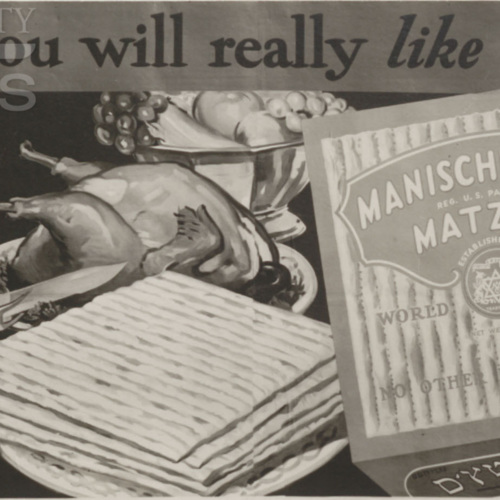 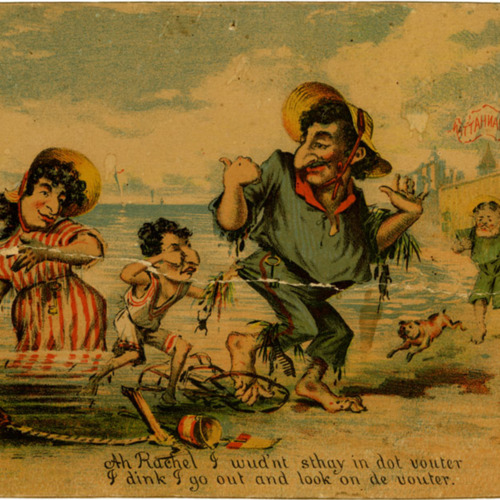 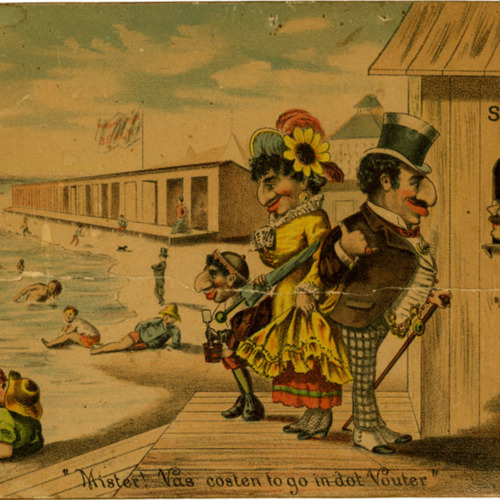